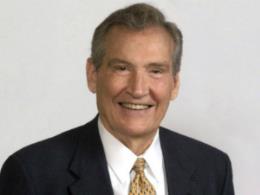 The Crown Wednesday, April 8, 2020
Tweet
The Crown (1777)Before Jesus was crucified, a crown of thorns was placed on his head. Though done by the hands of wicked men, this crown part of the magnificent plan of a sovereign God, who would use it as a message for all humanity. Matthew 27 sets the scene for the sacred mystery of that crown. In one sense, this was an act of mockery. Yet, there was a mystery here, known only by God: thorns symbolizes the curse that is upon humanity because of sin.When God created man and put him in the Garden of Eden, there were no thorns. It wasn’t until after sin infiltrated the garden that God cursed it with thorns. When He was crucified, Jesus wore this crown of thorns because He bore the curse. The crown also speaks of suffering, pain and brutality inflicted on Jesus during His crucifixion.Why were the Roman soldiers beating and mocking Him? Because of their rebellion; they were ridiculing His right to rule. Adrian Rogers says, “The root of all sin is refusing to bow the knee to your rightful king.”We must also recognize the saving ministry of that crown. Through these thorns, God was teaching a lesson that Jesus, who knew no sin became sin for us. (2 Corinthians 5:21) Because of His holiness, God never has, never can and never will let one sin go unpunished. There’s only one question...who will bear that punishment: us or Jesus? Adrian Rogers says, “Sin will be pardoned in Christ or punished in hell, but sin will never be overlooked.”Finally, we must remember: crowns have always been a symbol of authority. When Jesus wore this crown of thorns, He was the sovereign majesty, not a helpless victim. Even when it seemed out of His control, He was in perfect control.Jesus, in His glory, wears a crown. A crown of peace, righteousness and glory. But on our behalf, He wore one of thorns, bearing our curse, our sin, our shame to save us from ourselves once and for all.Thank God for the crown.Apply it to your lifeAll sin is due to be punished. Who will bear the punishment… you or Jesus?Today, ask God for His forgiveness of your sins. Thank Jesus today for wearing the crown of thorns. Bow the knee to the rightful King.

Featured Offer from Love Worth Finding 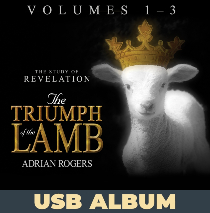 Triumph of the Lamb Series on USB

When Jesus Christ returns, He will be coming not as the Lamb led to slaughter, but as the Lion enthroned to judge. Perhaps you are like many who do not understand the prophecies in the book of the Revelation. Then, this first volume in the three-volume series by Adrian Rogers will enlighten you to the plans of God for the future of His people and His creation. If you are saved, this vision of Christ will cause you to feel awesome anticipation. And you will want to fall in reverence before His throne. Are you ready? Behold, He cometh!